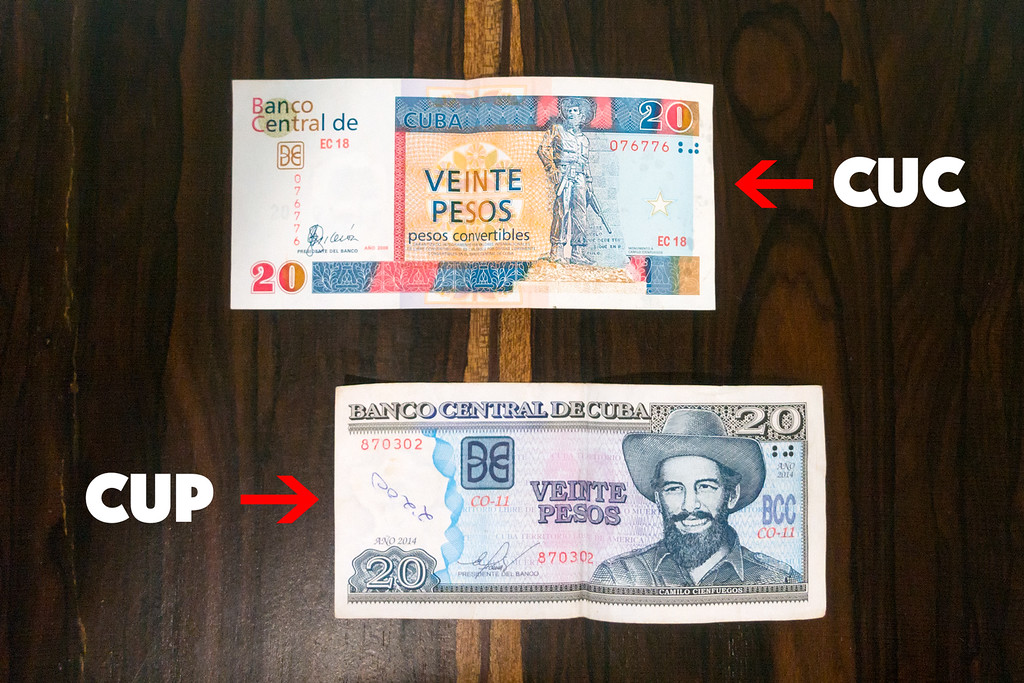 Money provokes a certain sense of confusion in Cuba as the dual-economy takes some getting used to. Two currencies circulate in Cuba: convertible pesos (CUC$) and Cuban pesos (referred to as moneda nacional, abbreviated MN). The currency situation is made more confusing since Cubans will refer to both CUCs and Moneda Nacional as Pesos.

For the average Cuban it will be obvious which they are referring to, but this may lead to confusion for tourists who consider that they are bargaining in local currency only to find that their counter-party expects payment in CUCs!

For most tourists moneda nacional has little relevance since most, if not all of their expenditure will be in CUCs. This includes accommodation, food in most restaurants, taxis, bus tickets, nightclub entrances, tips and so on.

Things, which can be paid for in local currency, include fruit and vegetables at the agricultural market, street food (such as pizza and peanuts) as well as local buses. Even at the agricultural market the prices are such that a pound of tomatoes may cost CUC 1 or 24 Cuban Pesos (i.e. the same). There are some restaurants and bars/cafes, which charge in Cuban Pesos although the quality is generally poor.

Try and avoid US dollars since you will be subject to a 10% special additional tax/commission.

The best currencies are Euros, Canadian Dollars, or Sterling since these are the most common and the exchange rates are generally quite reasonable. Bear in mind that the CUC is pegged to the US Dollar (at 1:1) so a stronger US Dollar means a stronger CUC (and hence less CUCs for your Euros/Sterling etc.). Other currencies, which are universally accepted at banks or Cadecas, include the Swiss Francs (CHF), Mexican Pesos (MXN) and Japanese Yen (JPY).

The easiest place to change money is at a CADECA (change bureau) or at a Cuban *BFI Bank. The exchange rates in all CADECAS and all banks are identical so there is no need to shop around. Hotels often have CADECAS within their premises. If you change money at the hotel front desk you will generally receive a worse exchange rate then elsewhere.

Note: It is generally very easy to find the nearest CADECA and you should be aware that any Cuban who tries to persuade you that it is complicated or that he can provide you a better rate of exchange will probably be engaged in some sort of scam which is best avoided.

* There are 4 main banks in Cuba. BFI is the most reliable. You may be able to use other Cubans banks but these are less likely to be able to meet your needs since most operate mainly in Cuban Pesos. Always bring new bank notes, with no rips, tears or markings. All foreign coins are useless.

Make sure that you get a printed receipt when changing money

Cash is king in Cuba. Except in major hotels you should not count on paying for goods or services with a credit card anywhere in Cuba.